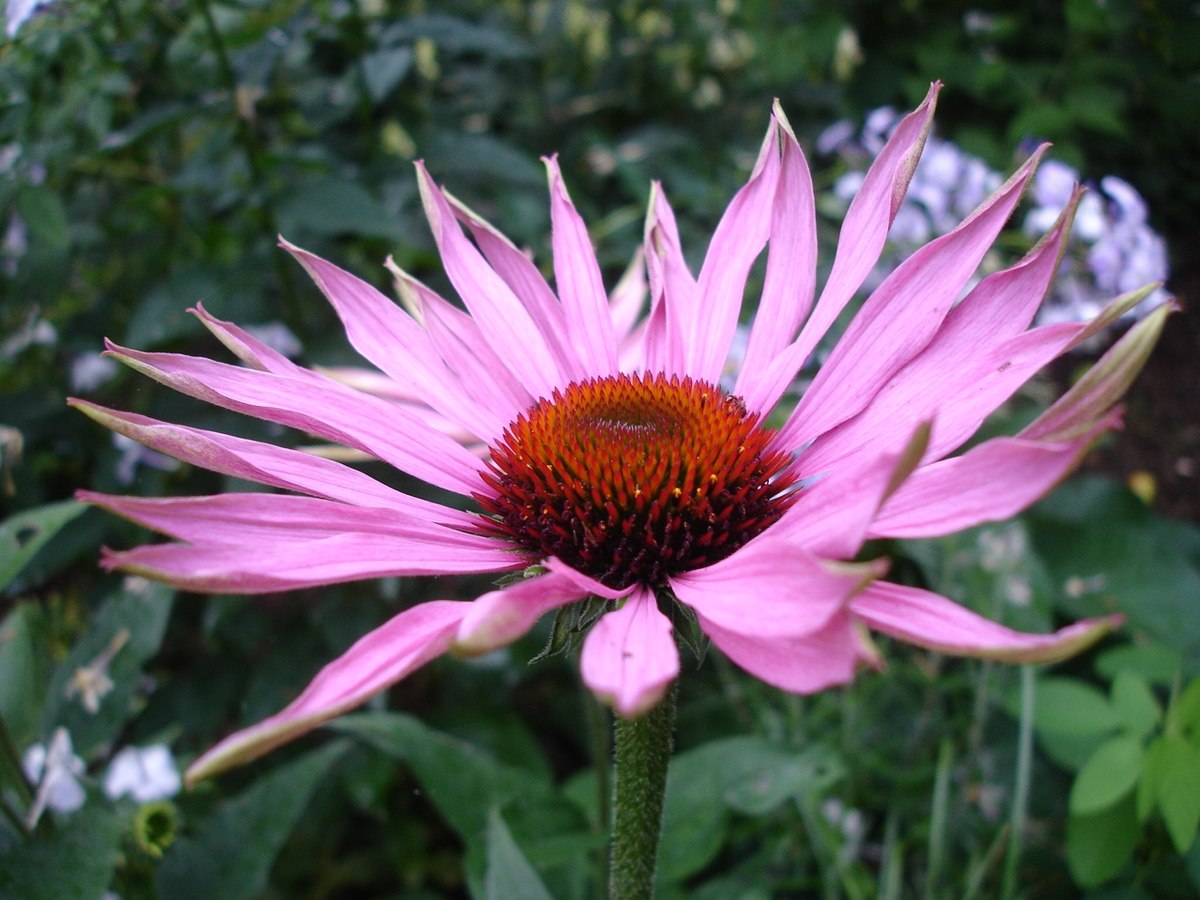 Coneflower, as it’s called, is a wonderful addition to any edible landscape garden space.  This lovely flower is tall and beautiful with petals that seem droopy, hence the name.  The pronounced center followed by the inverted petals makes it sort of look like an upside-down cone.

Echinacea is native to all but the most southern United States and can be cultivated in nearly all areas of the US.

Echinacea purpurea is the native and most common variety but there are others.  E. Padilla (pale purple coneflower) and E. Angustifolia (narrow petal coneflower) are the other varieties used for medicinal purposes and there are a huge number of cultivated varieties that are absolutely stunning that are worth growing for their beauty and habitat virtues alone.

Echinacea has been used in medicine for hundreds of years that we know of, and is one of the most popular supplements in the United States, according to WedMD.  Prior to 1950 and the introduction of antibiotics, it was widely held as a medicinal treasure.  It is now a $28 million industry in the US alone!

The herbal actions are:

– Some of these herbal actions were not defined in my Intro to Herbal Actions and can be found here.

The NIH (National Institute of Health) has published research showing fascinating research about the benefits of echinacea relating to brain cancer.   The use of echinacea as a natural cancer treatment is now being recommended alongside or even in place of “conventional” treatment!

Echinacea also boosts the immune system,  reducing the chance of the common cold by 58% and as a treatment for both the cold and the flu. The NRCS (a division of the USDA) reports that the immune system seems to be strongly influenced by the level of the dose.  It appears that 10 mg per kg of body weight, over a 10 day period is effective as an immune system stimulant.  It will also reduce the severity and length of a cold.

Coneflower is used as a painkiller and is especially effective in reducing pain associated with:

It also improves skin function and was used by native Americans for:

It was also used to regenerate skin.

Echinacea Angustifolia is a recommended remedy for the treatment of ADD & ADHD in both adults and children.  Dosage is important and it’s recommended that no more than 20 milligrams be taken.  Taking more than that cancels out the benefits.

It also boosts upper respiratory issues such as

Echinacea also helps fight infection.  It is known to help with:

Precautions:  High doses can cause nausea and dizziness, particularly in those who have allergies, so it is not recommended for those who currently experience seasonal allergies.

There are many over the counter products containing echinacea and it is thought that liquid preparations are better than capsules.  It was also reported that a study of 11 different brands resulted in only 4 having actually contained what was stated on their labels and approximately 10 percent had no echinacea at all, half the products were mislabeled as far as species is concerned and more than half did contain the labeled amount of ingredients!  For these reasons, I suggest we make our own preparations!

The constituents in the upper parts of the plants such as the leaves and flowers differ dramatically from the root of the plant and the roots should only be used when the plant is between 3 and 4 years old as they are the most potent during that time.  It is important to know the use you are looking for before harvesting so you know what part of the plant you need.

Research has shown that the anti-viral compounds are not found in the root and are 10 times higher in fresh plant material than dried!  For this reason, it is recommended to grow your own and produce your own supplement.  You could go with a tea or a tincture, but a tea will only yield you the water soluble nutrients and not the fat soluble.  For that, use a tincture.

Uses in the Garden

Echinacea is not only medicinal but has a multitude of uses in the garden.  Since it’s a flower, it is a beneficial insect attractor.  It will attract bees and other pollinators like predatory wasps and butterflies as well as pollinating flies.

In the fall, as the flower dries and the seeds mature, this flower attracts the goldfinch, which will feed on the seed of echinacea.   Many gardeners, therefore, will not deadhead the flowers so that they can watch these beautiful winged creatures.  The benefits of attracting birds to the garden are many, including the fact they eat bugs and fertilize your garden as well.

Coneflower is also a perennial, so you’ll only have to plant it once and you’ll have flowers every year from here on out.  It is sun tolerant and shade tolerant so plant it wherever you want in the garden!

Echinacea is easy to grow.  The only requirement is that it has well-drained soil.  It is not outcompeted by weeds because it is a native North America prairie species.  It has a long taproot that makes it drought tolerant.

To plant, simply press the seed into the soil when it has warmed to at least 65 degrees.  Provide water and shade while getting established for best results.  After that, sit back and enjoy.

One note, seeds must be started by January 25 if you want to obtain a flower yield the same year.  This is not a huge issue, though, since they are perennial.  If it doesn’t flower this year, it will from every year from now on.

If harvesting plant material, just cut as needed.  If harvesting the root, wait until the plant is 3 years old but not older than 4 years old as this is the time the root is most potent.

As stated above, fresh plant matter has 10 times the active constituents so there is no need to dry or cure this material.  Just harvest as needed.