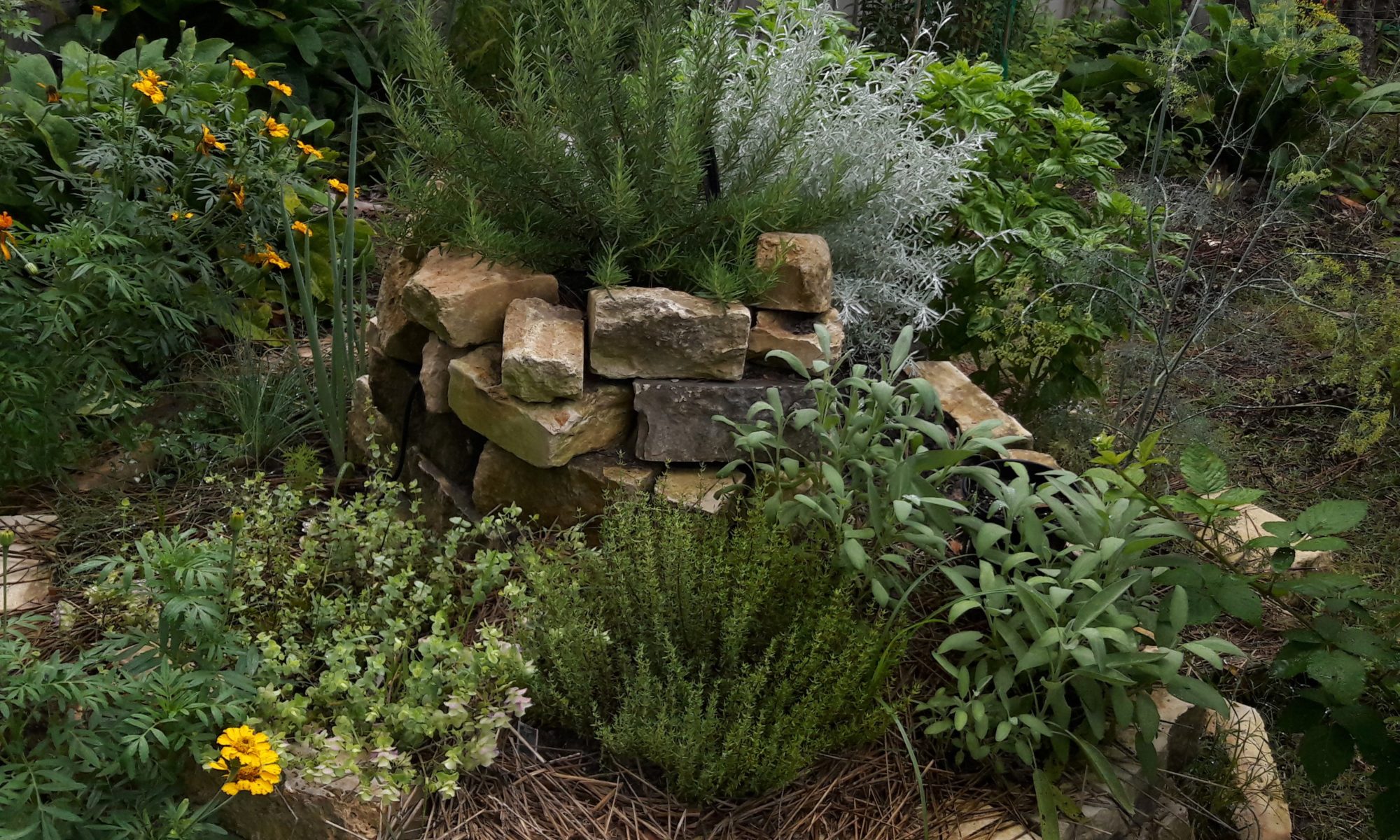 Welcome to the first post of many dealing with herbs.

Herbs are one of my favorite plants as they provide so many benefits to us as humans and to the ecosystem they’re a part of.  There are so many wonderful herbs that will grow in our area it seems almost limitless as the uses and places we can plant them.  Just a few benefits of herbs are:

Most of us are familiar with the culinary uses of herbs such as rosemary, sage, mint, cilantro, thyme, etc. so I will not go into great detail in this post about the culinary uses, although I might in future posts.  What I’d like to cover in this introductory post is other uses for herbs in and around the garden, especially healing uses.  For full disclosure, I must admit that nothing in this series is meant to construe medical advice and is not intended to diagnose, treat or cure any disease.  Now that I have that annoying GovCorp antidote out of the way, let’s delve into the wonderful world of herbs.

Herbs play a vital role in the ecosystem, especially in ecosystems we create.  Herbs will attract predatory wasps, which are tiny wasps that lay their eggs on devastating pests such as caterpillars, Japanese beetles, potato beetles and cabbage worms.  Predatory wasps are attracted flowers, as they are also pollinators.  This means you will want to plant flowering herbs like borage and basil to attract these beneficial predatory wasps.

Herbs also contribute as part of an integrated pest management system in that they themselves can actually help repel pests directly.  For example, French marigolds will actually repel root-knot nematodes.  This occurs due to the roots exudating alpha-terthienyl, a toxic substance to a few variety of pest nematodes as well as some fungi and bacteria.  Some say this is a controversial statement but certain criteria must be met in order to achieve the desired result, such as making sure you choose the right species of marigold, tagates.

There are also certain herbs which, believe it or not, actually eat insects.  That’s right, you’ve all heard of the Venus Fly Trap.  Well, it’s not the only one that traps insects.  Most of these insect-eating plants are tropical and may or may not survive in our gardens but we can still benefit from trap crops.  Trap crops are plants that are planted around our garden to encourage bugs such as aphids to attack them rather than our vegetables.  Nasturtium is one such trap crop.

Herbs also make great companions in the garden.  All of the above-stated reasons are also reasons herbs are great companions, but did you know that just by growing certain herbs next to certain fruits or veggies, you can actually improve flavor and increase yields?  Yes, you sure can!  A couple of examples would be growing basil, thyme and/or garlic next to tomatoes.  These will impart a fantastic Mediterranean flavor to your tomatoes.  Not only that but then they are right there ready to harvest together!

Another example would be growing clover in with your greens like lettuces, chards and cabbage.  Clover, being a legume, will release nitrogen into the soil, increasing yields of these leafy greens.

Dynamic accumulators is a fancy way to say these plants “accumulate” a “dynamic” range of minerals.  This is important because they make these otherwise unavailable minerals bioavailable to surrounding plants by having deep roots that extend past the root zone of other plants, bringing up minerals from deep within the earth and then depositing them on the surface for soil life to break down and share with surrounding plants.  One example lambs quarters.  Lambsquarters has 36,000 ppm of phosphorous, which is a macro-nutrient.

Another use of herbs is for helping with soil structure.  We all know our plants need the proper soil structure for optimal health and growth.   A natural way to break up soil is found in herbs.  One example is dandelion.  Yes, dandelion, that evil weed that so many homeowners go to war with with chemicals like RoundUp (glyphosate).  Dandelion is a fantastic herb that we will be discussing in the future but one of its benefits is the ability to break up compacted soil.  You will often see dandelion growing straight up out of concrete!  This is a testament to its ability to break up soil.  This amazing herb will be discussed in future posts.

Nobody like weeding and yet we cannot have our gardens run over by weeds, smothering out all our vegetables.  Now, as a permaculturist, I believe weeds are a valuable part of an ecosystem and provide many benefits.  However, also being a realist that lives in the subtropics, I know that weeds must be addressed or we will find ourselves an over-run, overgrown mess that we’d rather avoid than enjoy.

There’s an herb for that!  Buckwheat is a cover crop that can be grown even in our hot summers, which is when we are not doing a whole lot of gardening.  Instead of letting the garden get over-run, plant a summer cover crop of buckwheat.  It’s fast-growing, tight, not allowing any sun to reach the soil and therefore preventing weeds.  It has many other benefits as well and those will be discussed in a later post.  Clover is another great option for a perennial cover crop, which as discussed above, also adds nitrogen to the soil.

Many people have heard of herbal medicine.  Some belief in its power, some don’t.  Really, it doesn’t matter if you believe or not, herbs have great healing powers!  Comfrey, or knit-bone, as the native Americans called it, has cell regenerating qualities and will heal bruises, burns, sprains, scrapes, cuts and even broken bones.  However, DO NOT use it on any wound that has not been COMPLETELY sanitized.  It will heal you so fast, if there is any infection, it will actually seal the infection in.

I will not be listing all the medicinal uses of herbs in this post (because I’d grow old writing this post and you’d never get to read it) but I will be listing the medicinal uses for each herb we cover in this series.  However, I will say that many, even those who believe in herbal powers to heal, think of herbs as a replacement for modern drugs.  While some do work like that, I would argue that Hippocrates stated best when he said: “Let thy food be thy medicine”.  This means that through properly using culinary herbs on a regular basis, there should be limited to no need for herbs as a “cure” for illness.

Herbs and our Senses

Finally, herbs are wonderful for our senses!  They are beautiful.  They smell fantastic.  They bring beautiful butterflies and hummingbirds and dragonflies to our property.  There is such variety of herbs that anyone can find the herbs that suit themselves and the ecosystem they are creating.

Coming up next in the series will be a post on herbal actions and the ways to use them as medicine.  After that we will explore a different herb each week.