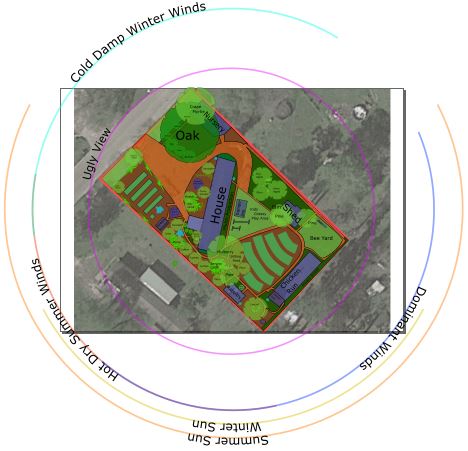 Here is another suburban design.  This property is 1/3 acre with a manufactured home about centered on the property placed lengthwise with walls toward the east and west.  The clients began organic gardening on this property before hearing about permaculture and are now permaculture enthusiasts.  They have big dreams for the small property and I will assist them in this endeavor.

This property, again, is in the humid subtropics, 80 miles from the Gulf of Mexico and in USDA Zone 9a.  They receive an average of 45 inches of rain per year but could be half to double that.  The previous 3 years have been extraordinarily wet years and have been about 65 inches.  The summers are very hot, with 30-60 days over 100 degrees and this property is in AHS Heat Zone 9, which has 121-150 days above 86 degrees.  This is a difficult zone to grow because you have 2 dormant seasons, winter and summer.  There are some vegetables that will grow through the winter and some that will grow through the summer, but for the most part, these are mostly dormant seasons.

Again, access and structure was already in place and will remain.  Water must be studied.  There are no real contours available on GIS websites because the land is relatively flat.  However, there is about a 2 foot drop in elevation across this 100 foot wide property.  Contours will be mapped out by hand using either an A-frame level or water level.  In this case, due to the small size we’re working with, an A-frame would be more appropriate.   From my observations, the garden was put in just as standard raised beds and not on contour, but the client revealed they are actually buried hugelkulur beds.  I will modify these slightly to allow for a bit more water harvesting  for the dought seasons, which they have not had recently but had an extreme drought just a few years ago which lasted for many years.   I’ve also designed in some traditional hugelkultur on contour in the back yard since the client is familiar with that style of gardening and will also harvest water.   Rainwater will also be harvested in IBC totes from the roof in the front and back yards as well as from the chicken coop and rabbitry.

The client wants a nursery and a greenhouse and also loves tropical fruits like mangoes and avocados which will require some microclimates in order to produce well, but we will be able to make work.

At the northwestern corner, we have placed the nursery.  This will receive filtered sun in the morning, mostly shade throughout the day and a bit of evening sun in the summer and some light throughout the winter days as well. It is protected from heavy winds, rains and frosts from a huge oak in that area. There is also a crape myrtle to the north that will help block winter winds.  To the south of that is a grassy area under the oak which we will mulch heavily with wood chips to help improve the soil in that area and prepare for a food forest.  Under that oak, on the west and south sides will be moringas, fig, apricot and peach, which will line the driveway.  The driveway is immediately south of that food forest and to the south of that is the kitchen garden.

The kitchen garden is fenced on all sides and the client has agreed to grown grapes, hardy kiwi, and ground nut on the fence with comfrey along the fence for chop and drop mulch in the garden.  I have also designed in a small garden pond and an herb spiral in this area, which is only steps away from the front porch, just outside the kitchen.  The greenhouse will go just to the south of this which has plenty of light from southern exposure and is just a few steps from the kitchen garden.

The greenhouse will go just to the south of this which has plenty of light from southern exposure and is just a few steps from the kitchen garden.

To the south we will be installing the tropical food forest, with avocado, mango, lychee, lemon, lime and a banana circle as well. This will be supplemented with moringa, to provide shade for the small trees, chop and drop as a superfood for the soils and as a superfood for the clients.  There will also be comfrey, roses, mexican mint marigold, hibiscus, mint and lemongrass to bring in beneficial insects and nutritous teas and culinary herbs.

To the north of that is another small area which has banana shrub, hibiscus, comfrey, and miscellaneous medicinal weeds.  Around the patio, there are raised boxes with cattle guards cut to grow vining crops to provide summer shade and edibles as well.  Growing here is stevia, cucumbers, grape, muscadine, geranium, aloe, wormwood and other medicinal herbs.

Moving along to the back we have another mushroom cultivation area that is almost completely shaded and then we’ll install an apple and plum guild.  To the south of that is a kids play area with soft grass.  Their daughter is in gymnastics and will have a trampoline, balance beam, bars and some open play area here.  Between that and the house is an area we will use for mulch production and for compost fodder.

On the south side of the house we will have another raised box for growing rabbit food and climbing vines that will provide shade for the southern exposure (master bedroom) and food for the clients.  Chinese wild yam has been chosen for this spot for its beautiful fragrance, evergreen quality and tasty tubers.  Cucumbers can be grown here seasonally as well.

To the east of the banana circle is the rabbitry.  I have placed a plum tree here to help shade the rabbits from the western sun in the summer and allow light in the winter.  Also providing shade here is a passionfruit vine.  To the south of the rabbitry are a loquat guild and a small succulent garden the client wanted.

Moving along to the east is a chicken coop and run, followed by a small bee yard.  To the north of that is the shed and that completes the “chore circle”. Inside this “chore circle” and between the play area and the chicken area will be the hugelkultur bed area.  I have also designed in, per client request, a sitting area in the middle of the backyard but closest to the shade provided by the banana circle, an existing mulberry and pine and a future plum.

This design packs in the maximum productive area while preserving existing native trees, allowing a play area for kids, eliminating grass in 80% of the property and reducing much of the maintenance by going to a mostly perennial system.  Only the kitchen garden and hugelkultur beds will be annual systems.

A privacy screen of Japanese honeysuckles will be planted along the southern fence to help keep more privacy. Native wildflowers will be planted in all open areas for additional forage for the bees and to provide natural beauty and fragrance to the landscape.