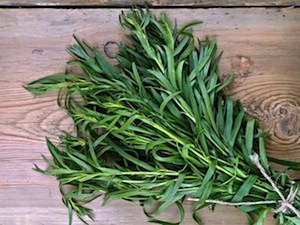 Artemisia dracunculus (little dragon), commonly known as tarragon, is one of the most expensive herbs one can buy and is the most widely used herb in French cooking.  It is native to Russia, Eurasia and China.  It is now spread widely across Europe and North America.  It has been used for medicinal purposes over 600 years.  Introduced to Italy during the 10th century by the Mongolians, it was used as a sleep aid, breath freshener and as a culinary seasoning.

Tarragon is in the sunflower and daisy family, Asteraceae.

There are 3 main types of tarragon:  French, Russian and Mexican.  French is the main culinary use, while the Russian is the most closely related to the French but not nearly as flavorful or aromatic.  Mexican tarragon is also called Texas tarragon but is not actually a tarragon at all, but rather in the Tagetes family, (aka – Marigold)!

True (French) tarragon does not like our hot humid climate here in southeast Texas so we will take a closer look at Texas tarragon, or as it’s called, Mexican Mint Marigold.

Tagetes lucida, actually has roots older than true tarragon and has been documented as being used more than 1000 years ago.  It is used mainly to cure digestive problems but when brewed stronger, it has been said to reduce the severity of hangovers!

It has also been used by natives for its psychotropic effects by way of smoking and interestingly enough, it was dried and powdered and then blown into the victim of a human sacrifice and was thought to have a calming effect on the victim!  I don’t recommend the plant for this use, however.

It is also antimicrobial.

Uses in the Edible Landscape

Besides being a great culinary and medicinal herb, Texas Tarragon also finds purpose in edible landscaping.  It makes a great companion plant as it attracts beneficial insects in late summer through fall when not a lot else is blooming and even deters some pests, especially the bean weevil and asparagus beetle!  Because it’s in the Tagetes family, it also helps repel the dreaded root-knot nematode!

Growing Mexican tarragon is extremely easy, just add soil, water and sun!  Honestly, this is a very hardy plant that only requires well-drained soil.  It doesn’t mind our extremely hot an humid summers, goes dormant for a very small period of time during the coldest part of our winters and endures full sun to part shade.  It survives our droughts and our floods and can be grown from seed, stem cuttings or root division.

Plant in well drained soil and water to get established.

Once established, no care is required other than for every 3 or 4 years to dig up and divide so it doesn’t crowd itself out.

Harvest young growth as needed throughout the year with a sharp knife or scissors.

Texas tarragon grows for 10 months or more out of our year but to make sure you have some available during January and February, you may trim the plant back in November or December and dehydrate and use over the winter.  Unlike true tarragon, Texas tarragon saves wonderfully as a dried herb.